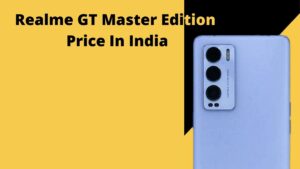 Popular smartphone company Realme is going to launch a powerful smartphone next week, named Realme GT Master Edition. For those who love gaming as well as those who buy premium smartphones, this is the next offering from Reality, which is tremendous in terms of looks and features. Even before the launch, the image, specification as well as price details of Realme GT Master Edition, a special phone of the Reality GT series, have also been revealed. It will be launched on 21st July.

Realme GT Master Edition has been seen on the Chinese micro-blogging site Weibo in the past, which has revealed that it will be launched in 2 variants. This upcoming smartphone from the Reality GT series will see other features including a large display with full HD+ resolution, powerful processor and battery as well as triple rear camera setup. Talking about the design, in the past, Realme Vice President Suu Kyi Chase shared the image of Reality GT Master Edition, in which it was revealed that its rear leather design.

Talking about the possible features of Realme GT Master Edition, according to leaked reports, it will get a 6.55-inch Samsung E4 Super AMOLED to display with a refresh rate of 120Hz. Android 11 operating system and Qualcomm Snapdragon 870 SoC processor will be seen in this phone. On the other hand, talking about the variants, it will be launched in 128 GB and 256 GB storage options along with 8 GB RAM.

The Realme GT Master Edition will house a 4,300 mAh battery that will support 65W fast charging. Reality claims that it will take just 32 minutes for this phone to be fully charged. Talking about the camera, along with a 32 MP front camera for selfies, a triple rear camera will be seen in it, whose primary sensor will be 64 MP. It will have an 8 MP ultrawide lens as well as a 2 MP macro lens. This phone can be launched around 25 thousand rupees.