Samsung, which has launched more than one smartphone in the budget and mid-range in India, is soon going to launch the new Galaxy A series phone Samsung Galaxy A12s, which will be the successor of Samsung Galaxy A12. Recently this phone was seen on many certification sites and now the discussion of its launch has started gaining momentum. There is a lot of sales of Samsung’s budget and mid-range smartphones in India, in such a situation, Samsung is going to strengthen its portfolio further and give better options to the people. 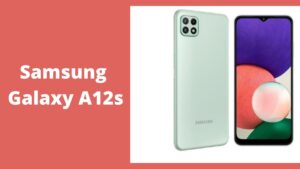 Popular tipster Sudhanshu Ambhore has shared the details related to the possible price and features of the Samsung Galaxy A12s even before the launch. According to the leaked report, the Galaxy A12s will soon be launched in two variants, in which the price of 4 GB RAM 64 GB storage will be around Rs 16 thousand and 4 GB RAM 128 GB storage variant will cost around Rs 17,607. These prices are for European countries. Samsung will launch this smartphone in Black, White, and Blue color options. This phone has been called Bluetooth SIG and Google Play Conso in the past.

Speaking about the possible features of the Samsung Galaxy A12s, it has just got to the notice that it will have a great Exynos 850 processor and Android 11 operating system. Until the full details of this phone are revealed, then know about Samsung Galaxy A12 that this phone has a 6.5-inch PLS IPS display panel, which has a resolution of HD i.e. 720×1600 pixels. The company has launched it with MediaTek Helio P35 processor and it has been introduced with 6 GB RAM as well as up to 128 GB storage.

Samsung Galaxy A12 is backed by a 5,000mAh battery, which supports 15W fast charging. The quad rear camera setup has been given in this phone along with the 8-megapixel front camera, whose primary sensor is 48MP. It has a 5MP ultrawide lens as well as a 2MP macro lens and depth sensor. It is likely that similar features will be seen in the Samsung Galaxy A12S as well.