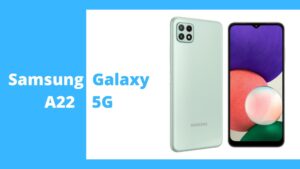 Launch, Price, Specs Of Samsung Galaxy A22 5G In India

91mobiles website as described quoting a retail source that the Galaxy A22 5G will be begun in India in two variants, with the RAM of 6GB and 128GB storage variant priced at Rs 19,899 and 8GB RAM variant. The price of the 128 GB storage variant itself is Rs 21,999. Samsung Galaxy A22 5G has been launched in other countries. Samsung Galaxy A series phones sell well in India and many more mobiles are going to be launched in the future, which are of mid-range and their price is between 10 to 20 thousand rupees.

Features Of Samsung Galaxy A22 5G

Talking about the potential features of the Samsung Galaxy A22 5G, it has a 6.6-inch TFT display, which has a display refresh rate of 90Hz and a screen resolution of 1080×2400 pixels. It will have a V-shaped notch for the selfie camera. Equipped with Android 11 OS and One UI, this phone will have MediaTek Dimensity 700 5G processor.

Equipped with a 5,000 mAh battery with 15W fast charging support, this phone has been launched in Grey, White, Mint, and Violet color options. The Galaxy A22 5G has an 8MP front camera for selfies as well as a triple rear setup with a primary sensor of 48MP. It has a 5MP ultrawide sensor and a 2MP depth sensor.

Specification Of Galaxy A22 5G